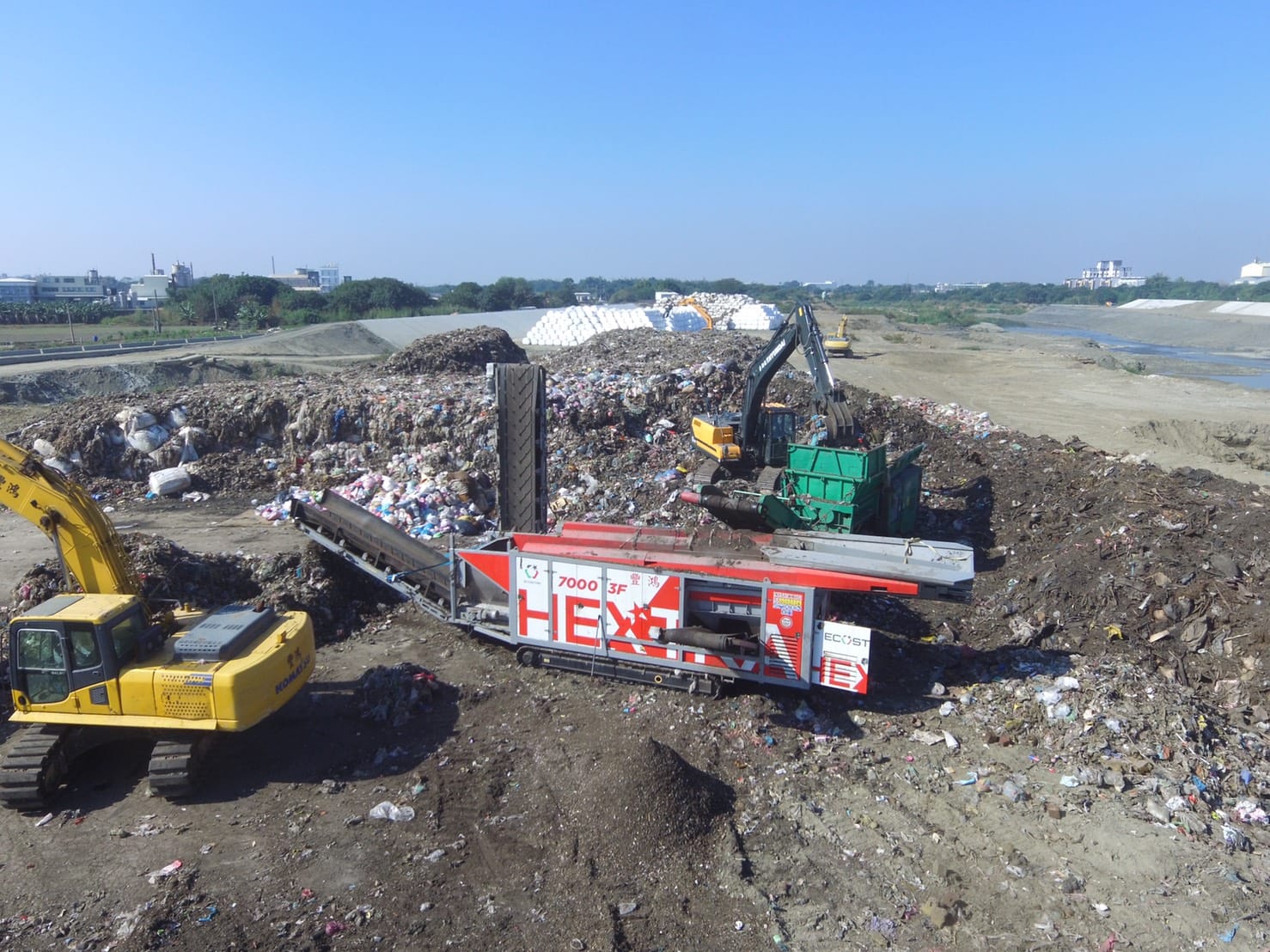 FROM THE PLASTIC TO SANITARY AND FOOD WASTE: WHAT ARE THE EFFECTS OF THE PANDEMIC?

The World Bank estimated that globally, in 2020, we generated around 2.24 billion tonnes of solid waste, and around 33% is not being managed in the right manner. But the worst is yet to happen if the world continues to postpone the development of proper programs and waste management systems. By 2050 the global population on the rise could generate around 3,88 billion tonnes of solid waste, meaning almost a 73% increase from the generated waste in 2020 and serious consequences on the climate, planet, and quality of living. This phenomenon concerns all of us, but some countries in Asia for example could suffer more, so we wanted to see how Asia is tackling waste and recycling, what are the biggest issues they are facing, and some of the key solutions found by a few countries.

Asia has been confronted for many years with serious waste problems like plastic waste and pollution as well as food waste. With China (which in 2019 generated the most single-use plastic waste, estimated at around 25 million metric tons) having banned in 2017 the import of 24 types of solid waste which included plastic waste, plastics have now found their way to Southeast Asia. The region is now facing a major crisis and associations like ASEAN (the Association of Southeast Asian Nations) are trying to address and solve some of the issues through programs like “The Regional Actional Plan” that aims to better use, collect and recycle plastics and address the marine plastic debris across the region. To understand the scale of the problem, it is estimated that in six of the ten ASEAN Member states over 31 million tons of plastic waste are generated in a year, and much of it ends in the oceans.

Moreover, COVID 19 has made things worse as plastic detritus from medical equipment, masks, gloves, and takeaway boxes have piled up and have not been handled correctly. At a global level, a WHO study states that around 87,000 tonnes of personal protective equipment were procured from March 2020 to November 2021 and shipped to support countries’ urgent Covid response. And most of it is expected to have ended up as waste.

Food waste is another pain point of the waste system in Asian countries. But let’s be aware of the fact that this is also a global issue – about 931 million tons of food are wasted each year globally. On top of everything, the war in Ukraine is having an impact on the food prices and food chain supply around the world, thus developed countries, as well as emergent economies, are suffering, as food inflation has gone up while transport and supply have been shortened.

Back to Asia, taking a look at a report of the World Bank in 2016 we can see that both in East Asia (including the Pacific) and South Asia food and green waste, thus organic is mostly wasted. 53% of the waste composition in East Asia and the Pacific is made out of organic, while in South Asia the percentage goes up to 57%. And much of it is either open dumped (South Asia) or disposed of in landfills (East Asia and Pacific).

But cities around Asia are keen in developing sanitary landfills and recycling systems and central authorities, as well as privately operated waste management facilities, are increasing their capacity to operate the waste. Besides, there are some Asian countries that have found some great solutions to tackle waste and are now leading the way.

From South Korea to Taiwan, Thailand, or India – how do Asian countries deal with waste? Opportunities and risks.

Back in 1995, South Korea was recycling only 2% of its food waste. Today they manage to recycle 95%, states a report from the World Economic Forum. How did they do it?

They played it smart. From the food landfilling ban in 2005 to biodegradable bags for food recycling that seems to weigh on the family’s monthly budget but also helped in covering the cost of recycling. Then came the smart bins in Seoul that charge the food that is thrown by weighing it, thus people eventually pay more attention to how much they buy and throw. Moreover, they are encouraged to remove moisture before they throw food so as to pay less. Smart, isn’t it? However, the moisture that ends up in processing plants is used to create biogas or bio-oil while the dry waste is used as fertilizer for the urban farms or community gardens in Seoul that are on the rise as the government supports such start-ups with 80% to 100% of the costs.

Taiwan has as well a pretty successful story, with a recycling rate above 50% in 2019, whereas in 1993 Taiwan was known as the “Garbage Island”. A mix of regulations, activists’ involvement, MSW charging scheme, and singing recycling trucks to help motivate consumers to recycle moved things forward.

Thailand, for example, according to a World Bank study is known to recycle 88.8% of its municipal solid waste. On the other hand, they do have around 428 kton/year of mismanaged plastic waste that mostly comes from rural areas and ends up in rivers and the marine environment. Moreover, the pandemic has put more strain on the entire waste management system, with incentives in the recycling sector going down because of the cheap oil prices ending up in less recycling, fewer margins, and more waste that risks flooding the country.

In India, almost 40% of the food that is produced in a year is wasted before reaching the consumer (Food and Agricultural Organization) while each person throws away around 50 kg of food per year that mostly ends up in landfills. But India is also making progress and its many initiatives, like the Swachh Bharat Mission that we will discuss in a second article, will help improve the country’s waste management system.

Instead of a conclusion

While some countries have made progress, others are still importing waste from wealthier ones, while also dealing with their own. With a growing population that is shifting from low-income to middle and high, waste generation per capita is predicted to grow and put some more stress on countries’ waste management systems. Thus, public and private funding, NGOs, and activists pushing into raising awareness of mismanaged waste and its impact on the environment and people’s lives, along with strong policies development and implementation are fundamental.

Ecostar is present in Asia with its Dynamic Disc Screening technology and screening mobile and stationary solutions. The Ecostar machines are working either in recycling plants treating old and fresh MSW, or directly in landfills to recover the most valuable part of the waste to be recycled.

You can discover more about the Ecostar solutions for your material here. 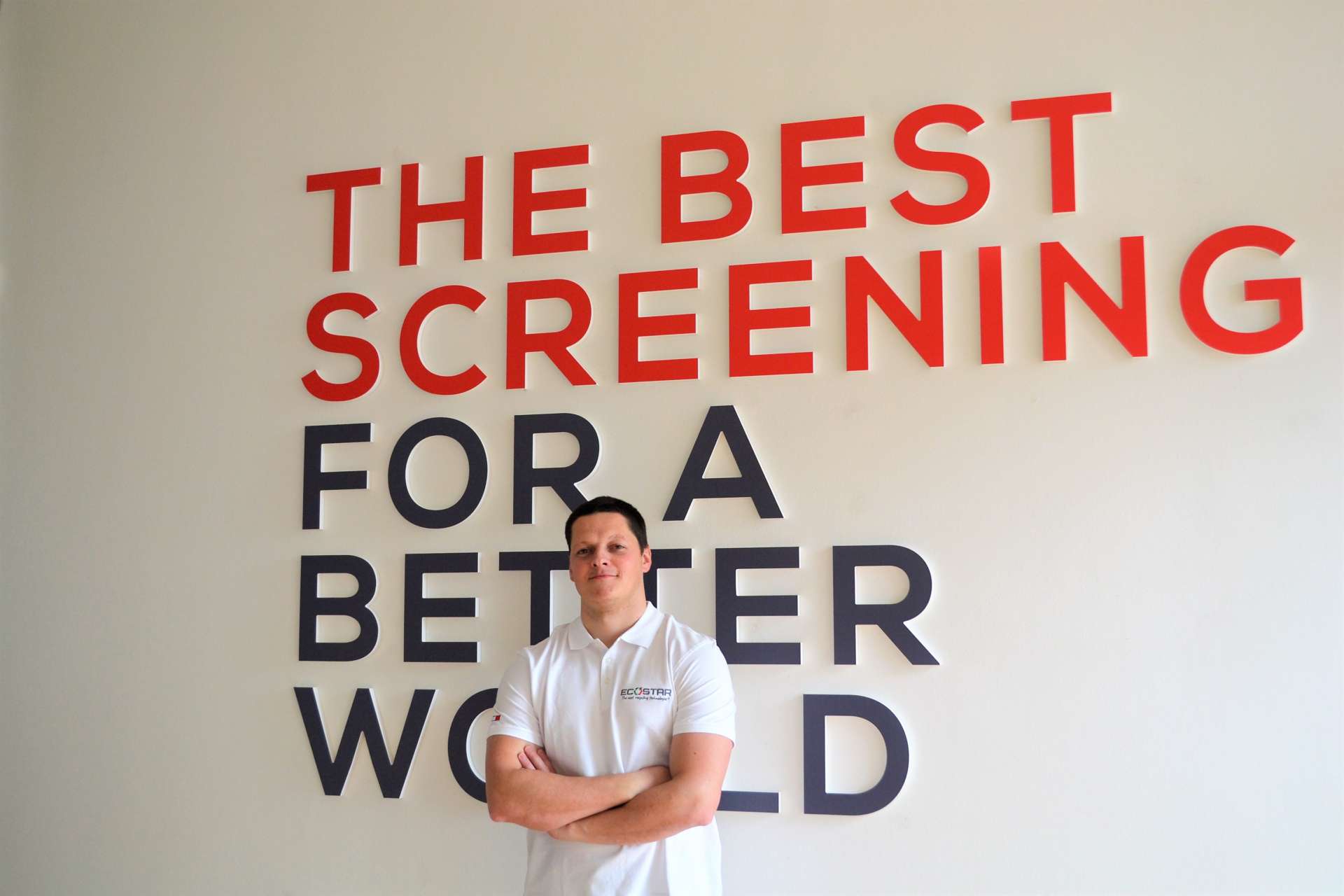 THE CUSTOM DESIGNED WASTE SCREENING SYSTEM. HOW TO CHOOSE THE BEST MACHINE FOR YOUR BUSINESS. The Circular Economy Action Plan, adopted by the European Commission, has some ambitious targets for the next years in the EU – recycling 65% of the urban waste by 2035, and 70% of packaging waste by 2030. Moreover, reducing waste, … Continued
21 March 2019 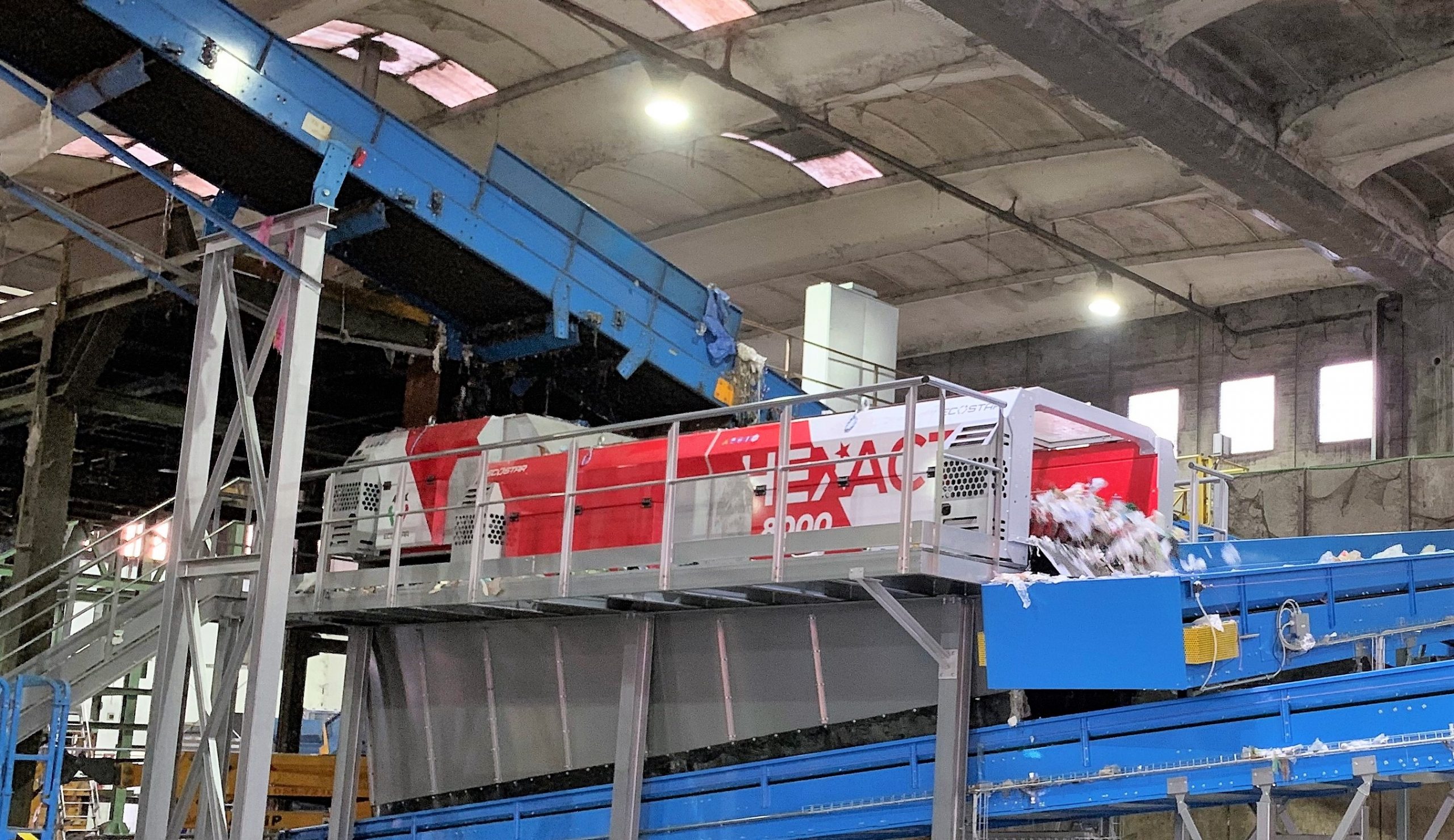 The plastic industry is one of the most powerful industries in Europe, ranking 7th, at similar levels with the pharmaceutical. In 2018, according to data from Plastics Europe, plastic production in Europe reached almost 62 million tonnes. In the same year, 29.1 million tonnes of plastic post-consumer waste was collected in the EU28+NO/CH in order to … Continued
26 June 2020 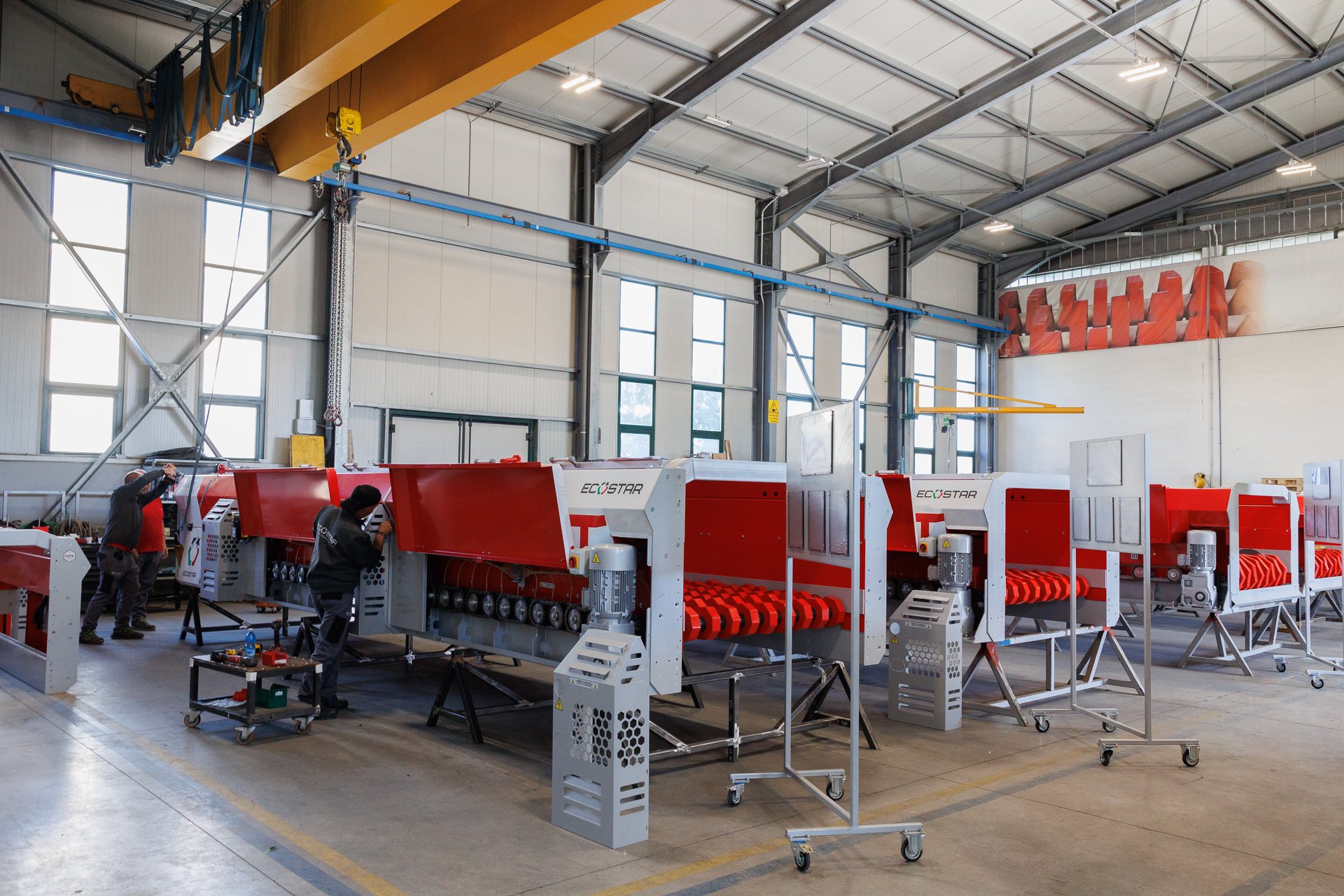 LEARN MORE ABOUT INDUSTRIAL WASTE RECYCLING AT OUR STAND AT THE ECOMONDO FAIR We have been in the business of industrial waste recycling for 25 years, having developed mobile and stationary screeners and technologies to bring more value into the recycling process by recovering the most useful materials and giving operators the right equipment to … Continued
24 October 2022